First Reactions and A Flood

Fortunately the nastiest thing about the first few nights was the intermittent buzzing and presence of "the Pump". Lin had found that the most comfortable thing to do was to place it on the bed somewhere between his shoulders and mine. So every time it did it's work and pumped the cocktail into his system it would emit a short buzz.

After the first night I had become used to the noise, but he was always conscious of the line to his portacath and so did not rest well. Being so skinny and devoid of muscle and fat, he said it would be too uncomfortable to sleep with it strapped against his body - imagine trying to sleep with the weight of a brick on your torso (maybe the next generation will feature lighter but more expensive batteries).


Monday night and Tuesday were good; hardly any ill effects. A nagging headache (mild) and chills. I resorted to turning off the air conditioning at night and heating his side of the bed with hot water bottles.


Wednesday and Thursday were not good; he could not explain it but I sensed a feeling of despair, desperation and despondency. I am only guessing but maybe he was thinking, "is this what I can expect each session for the next six or more months? Can I put up with it? Is it going to be worthwhile?"
He would not not eat, so I've tried him on Ensure, Fortisip and then Resource Plus. I had a tiny sip of each and they all were pretty much the same to me, like a sweet-ish malted drink. I could live on any one of these if I had no time to enjoy a decent meal! He had the occasional banana (soft food for his sore mouth - sore more because of his obturator than an eruption of mucositis).


Even the barley water I cooked up was no longer acceptable. "Yukk", he said, so I have been the beneficiary of barley's goodness!

He'e faithfully been taking his metoclopramide (helps with the nausea) , his iron pills (he's been anaemic since the cancer popped up), vitamin D3 and calcium (the ONLY 2 supplements allowed by Prof. Wong).


Touch wood, no fever.
He's spent most of the time in bed which is unusual for a person who likes to be up and about and never takes a nap in the afternoons (I am the total opposite, I'll lie down when I can sit!).


In the meantime, I have been to Takashimaya to check out the showroom display of Hitachi's 12 kg version of our new washing machine and chatting to Ann about the foggy, scratched panel on our machine. I told her that the control panel came with a plastic shield, but not the see through pane.


She immediately got on the phone to someone and assured me that when they receive a new shipment they will change out the door assembly for us.


Pretty amazing service and assuredly NOT the usual run of the mill Best Denki sales representative! If ever in the market for a washing machine go and see Ann at Best Denki at Ngee Ann city; she has me for life!


By comparison, Hitachi sent FIVE men (one a qualified Hitachi technician) to rectify their installation. As this happened on Wednesday afternoon when Lin was having "The Pump" removed (hooray!), I was not at home and only communicated with the technician by phone.


Despite my repeated comments about the see through pane not being see through, he steadfastly maintained that it was a dark colour and hence looked like it did. I held fast and kept saying that I have seen dark colored plastic panels before and they did not look like they had fine scratches on them (imagine the 'satin' effect that you find on stainless steel but on plastic instead). We ended our conversations at an impasse - until Ann intervened yesterday.


Wednesday also marked the BIG FLOOD on Orchard and Scotts roads in Singapore; quite unheard of because our drainage systems have been improved over the years. But then more buildings have gone up and even more are in a state of construction.
I did wonder, when it started to thunder and pour down, if Bukit Timah and Thomson Road were flooding, not imagining that Orchard and Scotts would be inundated. I could not see the flood waters for the intervening buildings, but I could see a solid traffic jam along Orchard Road in front of Wheelock Place and Far East Shopping Centre. 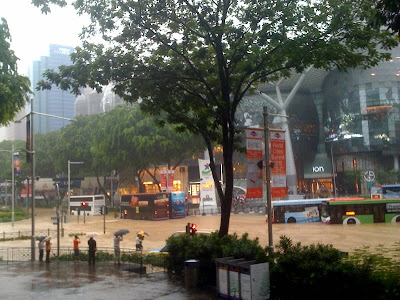 Someone sent me an email with the picture I am using here - thanks to the anonymous photographer! This is the famous Orchard Road and Scotts Road junction with the new ION shopping development in the background.


Good thing that our appointment at NUH was in the opposite direction and at 3:30pm, which gave time for the floods to subside.


As soon as we arrived at NUH, I left Lin to check in and headed straight for the Nasi Padang stall - I was famished as I had kept him company during his chemo side effect-induced fast. There wasn't much to choose from as it was between lunch and dinner sessions, so I had rice, lontong gravy with a bit of veg, a piece of tempe, Chinese spinach and bean sprouts. I spotted a veggie fritter and ordered one. And asked for lots of belacan (hot chilis pounded with shrimp paste). No trouble wolfing it all down!


When I had enjoyed my repast, Lin was waiting for a vacant chair. It turned out to be the same one he had when "The Pump" went on. Taking it off was much simpler and quicker.


Speaking as the "care-giver" (a misnomer in my case) I think that every one experiences different reactions to the chemo and each day that passes adds to the learning experience.


No wonder the oncologists and clinicians could not say with conviction what one could expect; they just had to recite the 'shopping list' of side effects. There's no second guessing each patient's reactions and the severity of the side effects.
In Lin's case, I hope that between now and his second session on June 28, that it is a steady upward trend rather than than peaks and troughs.
One thing I am pretty sure about is that chemotherapy certainly kills the good and the bad - and it is not restricted to one's cells.


I am convinced that it tries to kill one's spirit and will, as if in itself it is a test of one's resolve and determination to vanquish the beast of cancer.


And while it is early days yet, it seems evident to me that the place to treat cancer is in a public, teaching institution unless you have a bottomless bank account or a health insurance policy to die for (unfortunate pun!) for all the investigations, incidental medication and diagnostics - never mind the oncologist's fees and hospital and/or clinic charges.


Moreover, that's only the tip of the iceberg and only from the financial perspective. In my opinionated opinion, a holistic approach and a team are essential. Sure it can be done in other ways, but then the burden is so much heavier on the patient and the care-giver.


You are in your own hands and the hands of one man or woman. You don't have access to a cancer panel, neither does your oncologist. But then it doesn't matter as long as you are 100% confident in him or her.