Are We Speaking the Same Language?


Sometimes I wonder if the people I am trying to communicate with and I are speaking or writing in the same language!

So for some light relief, I am including the URL for a funny video about two Scots men and an elevator/lift (depending on where you are located) - it's from David and Frances Lomax's latest email. It would help if you have an ear for the Scots accent!


This morning I received two phone calls. The first was from a gentleman at the NEA (National Environment Agency) who, before he directed my email to the appropriate person, wished to clarify a few things. It also gave me a chance to ask some questions of him.


My first ever complaint - about an inconsiderate Subaru WRX driver - who drove against the flow of traffic to pinch a car park space was handled by the TP.


So this time, I had directed my complaint about the Beetle to the TP (see previous post and also  http://boo-n-bouquet.blogspot.com/ ). This time they said it was not under their purview and kindly forwarded it to the HBD (Housing and Development Board), who - after a while - reverted that this particular car park was not under their purview either! So, they, in turn, forwarded it to the NEA which is how I came to be having this chat.


By chance I also had  emailed the NEA about something else - vector control. Those of you in Singapore and Florida might know something about this because of malaria, dengue fever and the West Nile virus.


In Singapore many housing developments and condominium estates pay pest control companies who fog the grounds on a regular basis to control the presence of mosquitoes which might be carrying the dengue virus.


I avoid being around when fogging takes place because I have an innate fear of breathing in the fumes no matter reassurances from the management of our condominium.


A few days ago, fogging came up in conversation with some friends and I heard that the NEA had issued advisories to some estates that fogging is an option, not a necessity (my own words). So I emailed them to enquire about it.


I will tell you what they have to say when I hear from them.


In the meantime my own searching on the internet confirms what I have heard - that fogging only affects those (adult) mosquitoes present and does not prevent breeding. Thus to be effective fogging should be done when mosquitoes prevail, dawn or dusk.


Besides, since most of us are indoors at those times, mossies like to feast indoors.


As almost every website I visited emphasizes the importance of preventing the mossies from breeding (eliminate standing, stagnant water), I wanted some official verification of the situation before going to the management of our condo and suggesting we save money on fogging.


Right now we are spending money on repairing the koi pond under this building. If friends' experience with deformed carp in their ponds after intense fogging is anything to go by, then we should curtail or cease fogging in our estate lest we cause our koi suffer the fallout. We'd also save money!


Moving to the topic of animals the local newspapers have reported two instances of deer running free. One lot were from the Night Safari and the other were wild deer - same species. 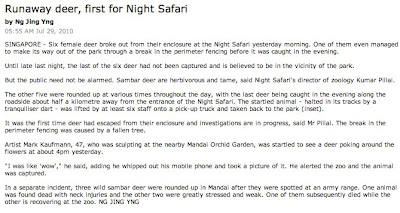 The last time (June) the media reported a break in a fence in Singapore, a Swiss graffiti artist was charged and then sentenced to five months' jail and three strokes of the cane. The irony is that his misdeeds would not have been discovered if not for a train enthusiast who filmed this MRT train and posted it on Youtube!


I personally think that we need to yank the chains of the highly paid executives in charge of the MRT and the security of its depots. Imagine two intoxicated expats with wire cutters and spray paint getting into a "secure" area and spray painting for a couple of hours. And no one noticing the strikingly sprayed trains for something like a week even though they were in service.


This is from Wikipedia: SMRT Corporation reported the incident to police only on 19 May, two days after the breach, because staff thought the brightly coloured graffiti was an advertisement. It was seen by many commuters and even recorded by a public transportation enthusiast and posted on YouTube.


And now for a last laugh:


PS: I use and abuse the English language as much as anyone. I misspelt 'cilia' (nasal hairs) as 'celia' in a previous post. As a matter of fact, I probably meant 'vibrissae' which is nearer the front of the nostril than 'cilia' which are further inside and finer!
Posted by AWH at Thursday, July 29, 2010