What a relief for everyone involved including the nurses at the Cancer Center! Lin's ANC went up sufficiently to be able to get his treatment today. After three abortive attempts, it was fourth time lucky.

Thank you for all your prayers; we are totally convinced that they made all the difference because his counts were lower the last blood draw (before today's) than the one before it. So please keep talking to your God for Lin.

Lest I forget, I have some input about "Watermelon Frost" - I have it on good authority that it has a high mercury content and so can be poisonous.


On the other hand I have heard good things about L-Glutamine (it's explained here in layman's language: http://www.ehow.com/facts_4826725_lglutamine-benefits.html). Your views are welcome.


It has been a good day in more ways than one; while he was lounging around at the Cancer Center I went in search of a sofa bed because we do need a bed or two for guests (should anyone deign to visit and stay). Or if I need to be in quarantine again.

I had seen one I particularly liked, but, as it is Italian and imported, it costs an arm and a leg. Even taking into account the sale price for GSS (the Great Singapore Sale which is on until July 25) plus an architect friend's trade discount.

Since then I had not met a sofa bed I liked. To assuage my despair and disappointment, I took myself off to a place called IMM (International Merchandise Mart?) where there is a big Daiso store (a Singapore $2 store or Hong Kong $20 store).

By chance, I stumbled upon lots of furniture stores - conveniently located on the same floor as the Daiso store. So on my way, I walked around the furniture displays.

And to my great delight I spotted a pair of chairs that resembled the Italian "sofa bed" that I had set my heart on (but not my pocket).

The salesman demonstrated the chairs and they had a similar mechanism. As chairs they could be twiddled and twirled to be back to back, face to face, in a v-formation or facing in different directions. You can keep one upright as a chair and the other opened up into a regular single bed.

And the price! (I could buy 4 of these and still have change from buying one of the real Italian job.)

Needless to say, when I said that the set must have been made in China there was no demur from the salesman. And when I asked if we could have a different colour than charcoal grey/black he produced two fabric swatches.

So I settled on what I am now going to call my 'China specials' which will be delivered tomorrow afternoon between 3:30 and 5:30. And a pair of covers in a much livelier colour - which will arrive around the end of the month.

So that was my second happy event of the day.

As things come in threes, I also received an SMS from Ann the home appliance sales lady at Best Denki (Ngee Ann location). She informed me that the new shipment of Hitachi washing machines was due in any time now and that she had been in touch with Hitachi who would call me and replace the door of my washing machine (some of you may recalI that I took issue with the opaque rather than clear pane on the door).

And so I waltzed in Daiso with a light heart.

There's nothing I love better than rummaging around $2 stores, stationery stores, book stores, DIY stores, hardware stores, sports stores, computer stores and kitchen stores. Judging by the number of people in the store on a Monday afternoon, it would seem that many other people share this past time with me (and I thought I was eccentric!). I guess bargains and junk turn some people on.

Having bought a piece of furniture earlier, I only spent $6 at Daiso.

Tonight is going to be the second time Lin has 'The Pump' (Lin thinks of it as a mill stone) as his sleeping companion for two nights. I will let you know if he gets on with it any better. 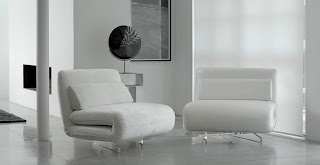 (I hope my chairs, when they arrive tomorrow, look like the ones on the left!)
Posted by AWH at Monday, July 12, 2010